The hemp industry has seen a massive boom over the past several years and things are just getting started. However, on December 12, 2018, Congress passed what is being referred to as the 2019 Farm Bill. The $867 billion bill is now on the way to President Trump for final approval and passage into law.

In addition to other key points, the bill notably legalizes hemp and will allow farmers to diversify away from traditional agricultural products, which have seen price slumps over the past many years. In addition, US hemp companies are now able to list on major domestic stock exchanges. This will provide a significant stimulus to the already booming industry. 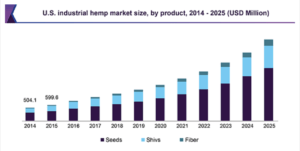 The total sales for the U.S. hemp industry in 2017 was $820 million, which represents a 16% increase from 2016. According to New Frontier Data, a cannabis market research group, “federal legalization could triple the overall hemp market to $2.5 billion by 2022, with $1.3 billion of those sales from hemp-derived CBD products.”

Hemp is also a relatively cheap and sustainable source of cannabidiol (CBD), which has skyrocketed in popularity as more people become aware of the potential benefits. With the hemp farm bill nearing official passage, the cultivation and creation of CBD products is no longer illegal, which presents a massive opportunity for businesses to jump on. Here are four hemp-derived CBD companies to keep your eye on in 2019:

Overview: The Alkaline Water Co. operates as the manufacturer and distributor of Alkaline88®, a leading bottled alkaline water brand. However, Alkaline Water recently announced its entry into the CBD-infused beverage market after signing an agreement with Infusion Biosciences. The company plans to license its proprietary aqueous phytorecovery process technology in order to create ready-to-bottle CBD formulations. With the Congressional approval of the farm bill, Alkaline Water will be poised to be among the first major US beverage company to offer “true water-soluble, full-spectrum bioactive CBD molecules.” While there are many startups in the CBD industry, The Alkaline Water Co. has a unique advantage as they have the financial backing of an established company behind them.

President and CEO of Alkaline Water, Richard A. Wright, commented, “Coming off the heels of another consecutive record revenue quarter, generated from our rapidly growing national footprint, we believe the launch of our new CBD-infused products will provide a significant increase to our sales growth.” On December 4, 2018, Alkaline Water was approved to trade on the NASDAQ market and just days later reported record monthly sales of $3.1 million during the month of November. The company saw a 55% increase in revenue for the fiscal year ending on March 31, 2018, which was $19.8 million, over last year’s $12.76 million.

Overview: Charoltte’s Web Holdings, Inc. is a Canadian-based company, operating in the production and distribution of hemp-based CBD wellness products. After a shaky 2017, when Charlotte’s Web Holdings received a warning letter from the FDA regarding the medical claims made about its CBD products, the company has really turned around. Charlotte’s Web Holdings, in their third quarter 2018 financial results, reported revenue of $17.7 million, which is a 57% growth compared to the previous year’s results of $11.3 million. Gross profits also saw an increase of 54%, rising from $9 million in Q3 2017 to $13.8 million during the third quarter 2018.

“During the third quarter we completed a successful initial public offering and private placement that generated significant capital for the Company that is being deployed to accelerate our growth in the hemp-derived CBD sector,” said Hess Moallem, President and CEO of Charlotte’s Web Holdings. They plan to use the extra capital to increase cultivation and production capabilities in order to meet the rising demand for CBD products.

Overview: CV Sciences, Inc. (OTCQB: CVSI) develops and commercializes specialty pharmaceuticals and consumer products that contain CBD. Furthermore, CV Sciences is number two in the CBD market with 11% market share. CV Sciences has had an incredible 2018 with 200% growth in sales year over year. In addition, on December 12, 2018, CV Sciences was awarded Nutritional Outlook’s “Best of the Industry” Award for its PlusCBD Oil

In their Q3 2018 financial results, CV Sciences also announced it has expanded its retail presence to 2,093 stores nationwide and continues to release new products, such as thePlusCBD Oil

Gummies, with more still in development. Joseph Dowling, CEO of CV Sciences, commented, “The demand continues to respond strongly to our leading PlusCBD

product line, #1 in the hemp CBD product category in the natural products retail channel and we believe this is just the beginning for the vast and nascent hemp CBD market.”

Overview: Medical Marijuana, Inc. (OTC Pink: MJNA) operates in the development, sale, and distribution of CBD-containing hemp oil and was the first publicly traded cannabis company in the United States. The company and its subsidiaries, Kannaway®, HempMeds®, HempMeds® Mexico, HempMeds® Brasil, Dixie Botanicals and Phyto Animal Health posted strong results in 2018. On November 27, 2018, Medical Marijuana, Inc. reported their third quarter 2018 earnings, which was the largest revenue quarter in company history. The reported $16.8 million in revenue represents a 116% increase over Q3 2017. For the nine-month period ending on September 30, 2018, revenue exceeded $42.1 million, which is a 146% increase over the same time period last year.

Dr. Stuart Titus, CEO of Medical Marijuana, Inc., commented, “In Q3, we saw incredible international expansion and released numerous exciting new products. As we continue our momentum in Q4, we will aim to increase shareholder value through further development of our subsidiaries and their product lines.” In addition to more products, the company has been focusing on expanding its presence into foreign markets with the securement of five new import permits from Mexico and the recent opening of a new office in São Paulo, Brazil.

Disclaimer: The author and Spotlight Growth has no positions in any of the stocks mentioned in this article. Nor does either party currently have any relationship, or any other conflicts of interest, with any of the companies mentioned in this article. This content is meant for informational and entertainment purposes only and should not be meant as a recommendation to buy or sell any securities. Please visit a licensed financial representative to determine what investments are right for you.

The post 4 Hemp Stocks To Consider As The Farm Bill Heads To President Trump For Final Approval appeared first on Spotlight Growth.