Dr. Keith Villa is best known for being the creator of the well-known craft beer company, Blue Moon Brewing, which is owned by the Molson Coors Brewing Company (NYSE: TAP). Earning a Ph.D. in brewing sciences at the University of Brussels, Dr. Villa initially introduced Blue Moon in 1995. After a strong 32-year career with Molson Coors and Blue Moon, Dr. Keith Villa retired from the company to focus on other endeavors.

Despite announcing his “retirement,” Dr. Villa has been very busy at work on his latest brew venture, Ceria Brewing Co., a non-alcoholic, cannabis-infused, Belgian-style ale. Looking to lead the charge and pioneer a new industry, Dr. Villa appears to be on something big.

Colorado is not only known as a well-known beer haven, but it was also the first U.S. state to legalize recreational cannabis. This opened the door to new possibilities for Dr. Keith Villa and Ceria Brewing. 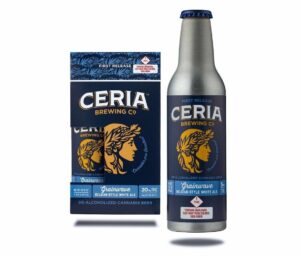 “It turns out a lot of cannabis products are popular for Christmas gifts,” he told Yahoo Finance YFi PM, adding that he’s seeing more and more first-time cannabis users as customers. “You don’t taste cannabis you taste great tasting beer with the effects of cannabis and that’s really critical because we found that the taste of cannabis is really polarizing. Some people love it, but most people don’t really care for it.”

The overwhelming demand has caused Ceria Brewing Company to expand Colorado operations in March and also begin looking for distribution expansion into California and Nevada dispensaries within the next three months.

This October, Canada is set to implement “phase 2” of its cannabis legalization, which will include edibles and drinks. This should further open the flood gates on the emerging cannabis beverage market, as U.S. demand already showing strength.

According to BDS Analytics, cannabis beverage sales are estimated to reach $374 million by 2022. This comes despite the fact that beverages only account to roughly 5% of the cannabis edibles market, according to the market research firm.

Ceria Brewing Company will likely eventually face some steep competition though as the market matures. Constellation Brands, Inc. (NYSE: STZ), the makers of Corona, made headlines after announcing a $4 billion investment into Canopy Growth Corporation (NYSE: CGC) (TSX: WEED) with the goal to develop cannabis beer. Even Molson Coors Brewing struck a joint venture deal with HEXO Corp. (NYSE: HEXO) to produce another line of cannabis-infused, non-alcoholic beverages. Cannabiniers’ Two Roots THC-based beer is another competitor to the Ceria Brewing Company, which is currently available in select markets.

Overall, the cannabis beverage space continues to take shape and consumers are itching to get their hands on the product. Ceria Brewing’s sell out in four hours is a major signal and confirmation of the potential high-growth that this particular market faces through the next several years. While major cannabis companies and brewers are racing to develop their own cannabis beer beverages, Ceria Brewing’s early success may help provide an edge, if they can continue to increase production.