It’s been an exciting two years for investors who’d picked up pot before it got hot.

For those who got in on the ground floor, you’re likely even now sitting back and feeling pretty proud of yourself for buying up a few big names before they soared. With prices reaching fever pitch back in the summer of 2018 and again in the fall, the perfect time to sell showed itself, but many investors were wary.

That wariness has pretty much remained for much of 2019. After a major dip at the end of last year, marijuana stocks as a whole seemed to climb back up until quarterly reports began to be released. That’s when the stocks started to dip down yet again. Just look at the Horizons Marijuana Life Sciences Index ETF. 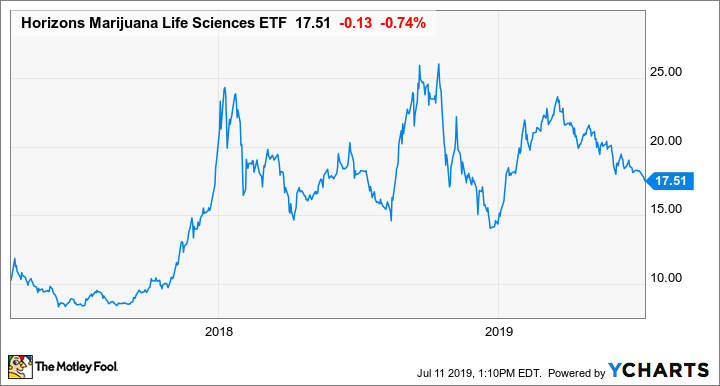 As you can see, the stocks seemed to be getting back to peak pricing but have since slumped down yet again to another dip in the world of dope.

So, does that mean it’s time to say goodbye to marijuana stocks? Absolutely not. One quarterly report should not be what deters a long-term investor in this potentially highly lucrative industry. Investors should be looking at the marijuana far beyond the borders of Canada; and I don’t just mean into the United States.

What investors should be looking for are three things: global expansion, high production, and low cost per gram. The cannabis companies out there that are setting themselves for marijuana production on a global scale at low costs are the ones that deserve the most attention.

That’s why the one stock I’d say is worth your investment on this latest dip is Aurora Cannabis (TSX:ACB)(NYSE:ACB). While the company may not be as focused on the potential coming from the United States, not only is it planning for global expansion, but it already has a foot in over two-dozen countries. The company is also pumping up production, with the ability to produce 650,000 kilograms of cannabis per year and plans to push that to 700,000 kilograms.

There are four points analysts have been wary about with this stock. The first is that the company will take time to get to this production level, when Canada is already backlogged with orders. The second is that when it does get there, it will create a glut of cannabis that cannot be sold. The third is that its strategy of acquisitions using shareholder money has severely diluted shares, making investors wary that the stock price will only go down further. And finally, it doesn’t have a brand-name partnership that will give it the cash it needs to continue growth.

Let’s look at these one by one. Canada is absolutely backlogged with orders, and Aurora will have to provide Canada with the cannabis it has as soon as it’s available. But once that’s done, the company can sell its pot around the world to a market that is only expanding as we speak and could be worth $200 billion in just seven years. To put that in perspective, Canada’s market could only be worth about $6 billion.

As for its strategy, it’s definitely not ideal for investors playing the waiting game right now. Buying up the stock and seeing it fall is disheartening, but it also makes now the perfect opportunity to buy up more stock. While the company has used shareholder money, it has also been allowed the freedom to do exactly what’s best for the company without the input from brand-name partners. It doesn’t mean partnerships aren’t out of the question; they’ll likely just be smaller without a huge stake in the company.

Then there’s that last point I made earlier: cost per gram. Here’s where Aurora really stands out. The company currently produces pot at a cost of $1.92 per gram, with plans to bring that down to $1. That is far and away below the average cost around $5 per gram, meaning when the company is completely up and running, money should pour in to investors’ pockets.

Investors looking for an opportunity to buy a dope dip should definitely consider Aurora Cannabis right now. The stock, much like other marijuana stocks, is in set-up mode. While it could be a few years before investors see huge gains, the opportunity is there to see intense capital gains in the next decade when the business is fully developed.

Source: The Fool
Buying the Dope Dip: Which Cannabis Stock Is Worth it?
The Fool