If you’re like me and have been watching Canopy Growth  (TSX:WEED)(NYSE:CGC) over the past year, you’re probably pretty dizzy by now.

The stock was on such a great trend, reaching the $70 range, when October hit — and hit hard. As you’re probably aware, share dropped to more than 50% where they once were, leaving investors scrambling.

Then things started to look up again. The stock has rebounded quite a bit, even hitting that $70 mark again. But since then it’s gone back done to just under $60 per share at the time of writing this article. I mean, look at its performance in the last year; if this is a roller-coaster ride, it’s definitely one that’ll make you nearly nauseous. 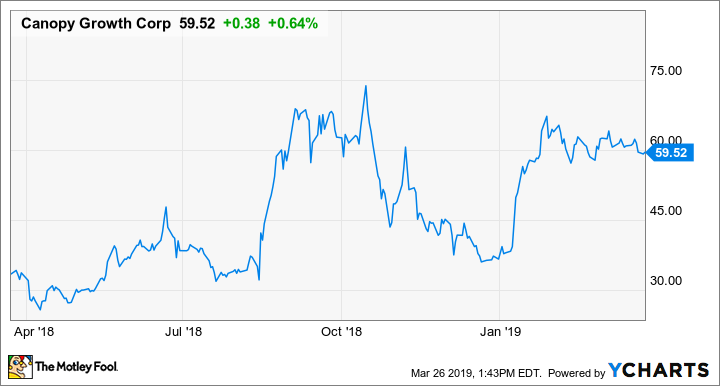 So, what the heck is going on?

If you were to look at Canopy’s news section on its website, you’d be even more in the dark on why this company’s stock isn’t on a steady trend upwards. Every few days, the company makes some sort of announcement in the hopes to help shares.

In the past week alone, the company announced a multi-year extraction agreement with HollyWeed Manufacturing & Extracts Inc., acquired AgriNextUSA, a hemp enterprise that will help Canopy expand in the U.S., and “received a cultivation licence from Health Canada for its facility in Fredericton, New Brunswick.” That’s a lot of good news.

On top of those announcements is the company’s latest quarterly earnings report, where it announced tremendous sales gains. There’s also the company’s 5.6 million square feet of cultivation space that will produce more than 500,000 kilograms of cannabis at peak capacity. And, of course, we can’t forget the $5 billion deal with Constellation Brands that’ll help Canopy expand over the long term.

While there’s a lot of good news being reported, it doesn’t really help investors right this minute. Canopy is in the midst of creating a base: acquiring companies, beginning its expansion into the U.S., expanding internationally, creating brand power, and producing as much cannabis as possible.

It’s completely unclear when all of this will be done. It takes a long time to receive licences from both Canada and the U.S. There’s likely going to be a lot of promises of production that then fall short. And while acquiring the mom-and-pop pot shops is all well and good, that costs money. It’s going to take a lot of money to buy out everyone that could get in Canopy’s way, from a popular shop in Denver to a thriving hemp producer in Alberta.

So, if you own this stock or are wondering whether today’s price is near the bottom, what should you do?

You’ll notice below that I own this stock, so I obviously want it to do well. However, I’m also looking for the best opportunity to either get out at top dollar or buy more to make more.

To be honest, I see this stock going down even further. While the company is reinvesting in its business, that means it’s draining its (albeit immense) cash supply. Over the next year or so, I wouldn’t be surprised if the company started reporting a few losses while they get themselves set up with their ambitious goals.

However, I’m definitely not selling any time soon. When I bought Canopy, it was as an investment. An exciting investment, yes, with some major moves at the beginning. But now that the dust has settled, I believe this stock has the chance to be the best.

With that in mind, I’ll be holding onto this stock for years to come and waiting for another opportunity to buy a few more shares when those earnings reports come in.