Hemp and CBD have become a very popular and profitable emerging industry in the U.S. and around the world. The industry’s future became even brighter after President Donald Trump signed the Farm Bill into law last year, which legalized cultivation of industrial hemp. The highb-growth is attracting the attention of a lot of businesses, which continue to pile into the industry in order to cash-in. However, there are several companies that are leading the industry not only in size, but also in product quality. Here are a few of the top CBD and hemp companies to keep an eye on:

Curaleaf Holdings, Inc. (CSE: CURA) (OTCQX: CURLF) recently made headlines after announcing a distribution deal with CVS Health Corp. (NYSE: CVS), in which CURA will distribute its line of CBD products across more than 800 CVS locations. CVS stated that it has begun selling CBD-based creams, sprays, and other products across eight states.

The company is engaged as a vertically-integrated multi-state operator within the emerging cannabis industry in the United States. The company currently has operations across twelve states with forty-three dispensaries, twelve cultivation and eleven processing facilities. In addition to medical & recreational cannabis, Curaleaf Holdings is considered to be a leader in the CBD industry, which operates its Curaleaf Hemp brand.

GW Pharmaceuticals Plc (NASDAQ: GWPH) may be better known as a biopharmaceutical company focused on multiple sclerosis, but the company has become a trailblazer in the CBD space. Last year they became the first company to have a CBD-based drug, Epidiolex, approved by the U.S. FDA.

The FDA approved the oral solution for the “treatment of seizures associated with two rare and severe forms of epilepsy, Lennox-Gastaut syndrome, and Dravet syndrome, in patients two years of age and older.” This nod from the FDA was a major deal despite the federal government’s stance on cannabidiol products. 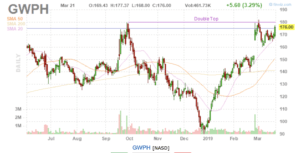 The company takes their position in the CBD space very seriously and plans to continue expanding research and development of new cannabis-based treatments. According to the Cannabist, “the group has been busy building its commercial team and will be targeting 4,000-5,000 doctors in the US, a big undertaking for a small company.” In an interview, GW Pharmaceuticals CEO Justin Gover said, “we consider ourselves to be world leaders” and “our job is to stay in that position as long as we can.”

Charlotte’s Web Holdings (CSE: CWEB) (OTCQX: CWBHF) carries a very powerful name in the CBD space and is the most famous brand on the market.

Charlotte’s Web is named after a young girl who suffered from seizures due to a rare form of epilepsy called Dravet Syndrome. Charlotte’s mother along with the Stanley Brothers developed a CBD product that essentially stopped her seizures. The product became very popular among parents seeking treatment for their children suffering from seizures.

In recent years, as CBD has become more of a household name, the company has continued to expand into a formidable enterprise. In September 2018, Charlotte’s Web Holdings went public through an IPO, which raised $100 million (CAD). Between hemp becoming officially legal in the U.S. and company’s strong following, Charlotte’s Web is well-positioned to take the market by storm in 2019.