So far in 2019, marijuana has been the place to be, as cannabis stocks have largely outperformed the overall market thus far through the end of April 2019. Two of the largest cannabis ETFs are up over 40% year-to-date: ETFMG Alternative Harvest ETF (NYSE: MJ) up 43% and the Horizons Medical Marijuana Life Sciences ETF (TSX: HMMJ) up around 51%. This compares to the SPDR S&P 500 Index ETF (NYSE: SPY) YTD return of 17.65%.

However, these gains are nothing when looking at the hottest sub-segment of the cannabis sector: cannabis extraction. The major rise and focus on cannabis extraction companies comes as Canada prepares for its next wave of cannabis legalization in October 2019, which will feature edibles, oils, and more concentrated products. According to Zion Market Research, the global cannabis edibles alone is estimated to be worth $11.56 billion USD by 2025. This represents a compound annual growth rate (CAGR) of 25.40% between 2019 and 2025.

This massive market is soon to be unleashed in Canada, which could soon help nudge other countries to follow suit. Among the top cannabis extraction companies that have seen a meteoric rise in 2019 is Valens GroWorks Corp. (CSE: VGW) (OTCQB: VGWCF). The company’s Canadian listed shares have skyrocketed 196% through April 30, 2019. However, after a strong melt-up, the stock looks ready for a breather.

Valens GroWorks started off the year around the C$1.52 area and currently trades at C$4.51. These gains have been driven by more than anticipation of the second wave of Canadian legalization. Management has delivered on a number of key extraction deals, posted very strong earnings, and organic certification.

With that said, the technical analysis of Valens shows that while the stock is in a strong uptrend, it is due for a pullback. The stock’s Relative Strength Index (RSI) is currently in overbought territory and positioning lower. Slow stochastics show a similar condition, with a very over-bought reading of over 85. The moving average convergence divergence (MACD) appears to be leveling off, with histogram narrowing after selling off on Tuesday, April 30, 2019. 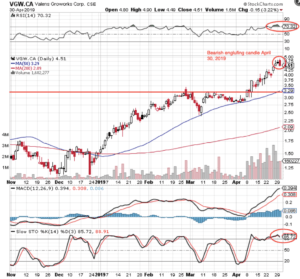 Another key short-term bearish signal comes from the bearish engulfing candle on Tuesday. Depending on the trading tomorrow, it could be a confirmation of a turning point lower for the stock.

VGW broke the key resistance level of C$3.25 in early April 2019 and has not looked back since. This level will be a key area to keep an eye on, as well as the 50-day moving average, which has served as support on two other pullbacks this year (March and early April).

Progress and Operational Success Has Been Key Driver of Price Action 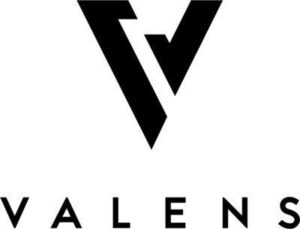 Aside from deal-making, Valens GroWorks also increased in extraction capacity to 240,000kg back in February 2019, which effectively made the company the largest third-party extraction company within Canada. More recently, the cannabis extraction company reported strong first quarter results. The results showed record revenues of C$2.2 million, gross profit of C$850,525, and a strong balance sheet showing over C$20.55 million in cash and short-term investments and net working capital of C$26. 39 million, as of February 28, 2019.

Overall, Valens GroWorks has continued to execute very well in 2019, but it appears the stock is getting a little overheated and needing a healthy pullback. While the long-term trend is estimated to remain intact, the short-term could present as a potential opportunity as the pullback works itself through and re-energizes. By no means is Valens finished, rather they are just beginning and appear to have a bright future ahead. With that said, the charts show investors can expect some potential bearish activity in the short-term.