Bruce Linton is a household name in the cannabis industry. He became the poster boy for the industry’s growth and all the potential that it offered. He’d often be in interviews on TV discussing the goals for Canopy Growth (TSX:WEED)(NYSE:CGC) and did a great job of captivating audiences and getting people excited about the company.

However, when he was let go by the company earlier this month, that should have served as a very loud wake-up call for the industry. As marijuana companies evolve and become more like typical corporations that are operated with a focus on fiscal responsibility and profitability, simply promising sales growth may not be enough anymore. It’s especially true for cannabis companies that have investors in other industries.

It doesn’t take much effort to connect the dots to see that Constellation Brands was a driving force behind the change in Canopy Growth’s management. After all, it was just days after Constellation reported its results to shareholders that Linton was removed from the cannabis company. The reality is that as much as companies from other industries may want to get involved with cannabis for the growth opportunities, they also don’t want to bleed cash to do so.

And Constellation’s investors haven’t been that excited with the company since its investment in cannabis: 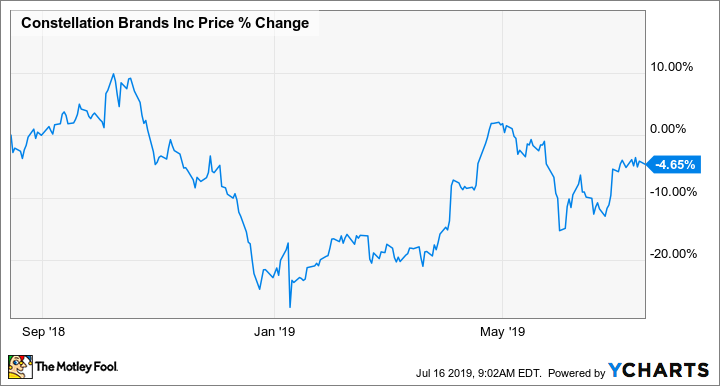 Did Canopy Growth focus too much on expansion instead of profitability?

Marijuana is still a tough sell in the U.S., where the substance is still illegal federally. Many U.S. companies have steered clear of the new industry out of fear that it could damage their existing brands. And while Canopy Growth was hopeful that its deal with Acreage Holdings would unlock lots of value over the long term, it’s an agreement that could be several years away from even being a possibility. As excited as Linton was for the deal, investors and management clearly didn’t feel the same way.

After all, more pressing issues for Canopy Growth have centred on the company’s lack of profitability and its troubling quarterly results. The problem is that while the industry is undergoing a lot of growth, and many companies will blame the rising expenses on expansion into new markets, the reality is that there are cannabis companies that have been able to turn a profit. Charlotte’s Web is a great example of a company that’s taken a much more methodical approach to its growth and hasn’t been overly aggressive. It’s resulted in strong sales numbers and an impressive bottom line as well.

Canopy Growth and others in the industry have been focusing on expanding into many different markets, often as quickly as possible. However, we know that North America is the most lucrative option in the near future, with the U.S. being the biggest once it gets fully up and running. And so chasing opportunities around the world where there’s still a lot of resistance to legalizing marijuana for recreational use doesn’t appear to be the best use of money.

Going forward, the industry is going to need to be more structured and purposeful with its use of cash. Pot stocks have not been doing well in recent months, and the Linton firing should serve as a big warning to cannabis companies that they’re going to have to clean up their acts and their financials if they’re going to be able to get investors to buy their shares.

Fool contributor David Jagielski has no position in any of the stocks mentioned.

Source: The Fool
Why the Bruce Linton Firing Should Be a Wake-Up Call for the Industry
The Fool